Owl's go camping in the Woodlands!

Eagle's camping trip to the woodlands

Look how the chicks have grown!

Wrens and Robins go on a woodland walk with Year 3.

Robins - come and see our classroom! 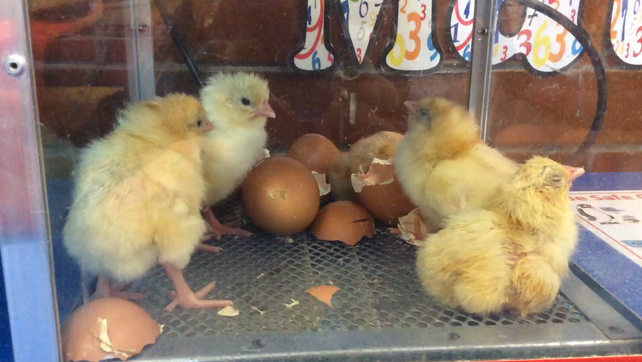 As part of our topic ‘Living Things’ we have teamed up with the company ‘Living Eggs’ to give the children a unique 10 day experience. We have hatched our own chickens! The children watched them hatch and are helping to look after them in their first few days. All chicks will be rehomed at the end of the programme in a free range farm or with a family. 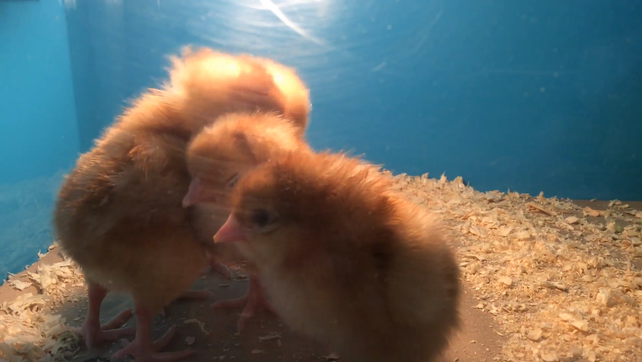 We hatched our own chicks!

Learning about the lifecyle of a frog.

Over the past few weeks the Reception children have been watching the development of the tadpoles and learning about the lifecyle of the frog.  They have seen frogspawn turn into tadpoles and waited patiently as they have finally witnessed them turning into froglets!

Capacity - we rounded off our learning about capacity by having a race to see who could fill their container first. We discussed how we needed to make the experiment fair, but it was only after the first race that it was decided that all the cups needed to be the same size!

Run to Rio - we are all really enjoying the challenge of running to Rio in time for the Olympic games this summer. 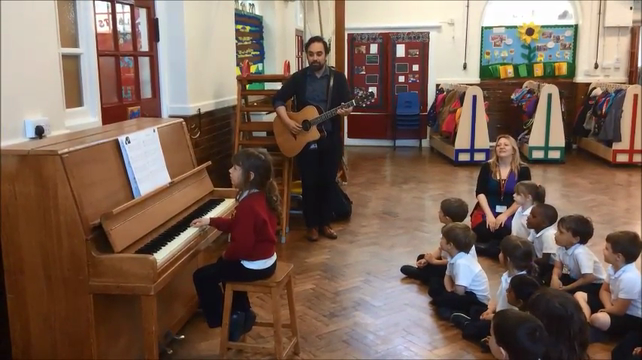 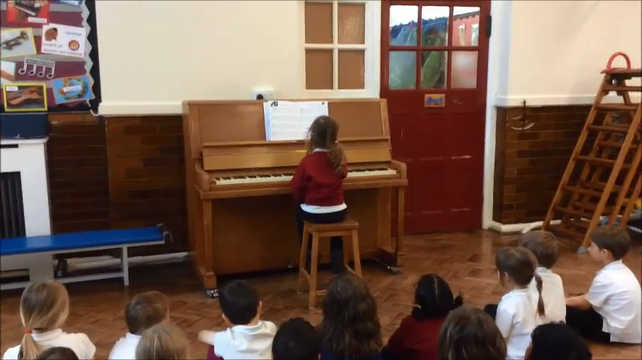 Elsie was very proud to have taken part in the East Surrey Music Festival in which she performed two pieces on the piano.  She brought in her music, and certificate to share her achievement with Robin Class.  She was keen to perform to us on the school piano.  The children listened rapt as Elsie confidently played the two pieces of music.  She wistfully said at the end "I would really like to show Mr Scullin."   As if by magic, Mr Scullin appeared and they had an impromptu "jamming session" with Mr Scullin accompanying on the guitar while she played "Au Clair de la Lune" on the piano.  Thank you Elsie, we enjoyed your performance immensely.

Jo Elphick from the David Shepherd Wildlife Foundation (DSWF) came to talk to us about their work to generate funds and to raise awareness of the plight of the world's endangered species.  She brought her lifesize Amur tiger with her and explained that through her charity's work with other organisations the wild Amur tiger population has increased from 100 in the 1980's to 450 currently.  DSWF are continuing to work to protect these animals from permanent extinction and their other projects also include the preservation of black rhinos, painted dogs, snow leopards, pangolin and moon bears.

Jo rounded off her talk by sharing the story "Augustus and his smile" by the author Catherine Rayner, who endorses and supports the work of DSWF.  The book has been used to inspire the children to produce some beautiful tiger paintings (photos to follow) and has been/will be the basis of our Talk for Writing sessions this week and next.

Music with Mr Scullin - learning about high and low pitch

We have been learning about what makes a healthy and balanced diet, and which foods we should eat often and which are best to have occasionally as a treat.  The children each made a sandwich using brown bread and chose their own healthy ingredients to fill them with (olive oil spread, cheese, quorn, tuna, tomato, cucumber and sweetcorn).

Making fruit punch and enjoying it during our picnic on the moon!

Making cheese or ham sandwiches for our picnic on the moon!

Author Visit! We had a fantastic day with Angela Kecojevic, author of the book ‘Hobbledown’. We learned about where she got her inspiration and heard about the characters in her book. She read some of her book to us and told us the funny names she made up for the animals in her story. She also showed us some ‘glime’ and magic fairy bubbles!

One of our storytelling groups chose a Star Wars theme.  It soon emerged they were real experts in the genre. They named so many characters, settings and story lines that it was hard to condense their ideas. Finally they came up with their story and retold it to the class. Breaking it down into characters (orange), setting (blue), how (pink), what (green), and finally the ending (yellow). They then put their story on paper in their own unique Star Wars Story Book. They were keen to show the results to Mrs Westwater.

Making and eating pancakes in Reception!

Chinese New Year! We made our own lucky Chinese dragon and had our own parade!

It was perfect kite-flying weather.
The children made kites with a plastic bag and some string.  They loved running and seeing the kite catch the wind and fly up into the air.
The children listened to the adult's instructions and took part in a kite running race. "On your marks, get set, GO!!"

When it was time to go inside, one of the children exclaimed "That was such good fun!"

We are Story Tellers... 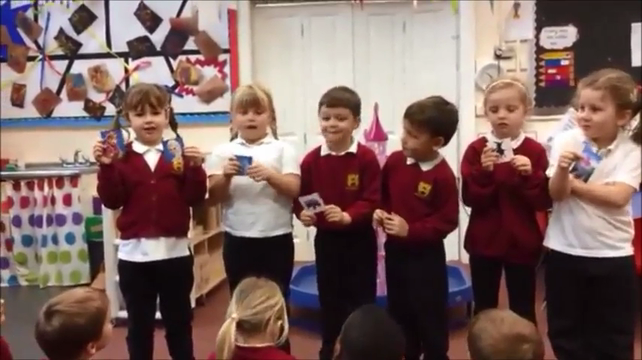 Children create their own story with a Frozen theme.

We are Story Tellers...

We have been learning how stories are structured and using our imaginations to create our own stories. The first group had chosen to tell stories around a Frozen theme.

The children had prompt cards which defined the essential elements of their story: Who (characters); Where (setting); How (how do they travel/move); What (what happens); and the Ending.  Each section had a  variety of pictures to give the children some ideas and inspiration for their story.

This is the story they produced:

Who: Once upon a time there was Elsa and Anna.
Where:  They lived in Elsa's ice castle.
How:  They rode a quad bike.
What: One day they met a witch who turned them into a Gingerbread Man!
The end:  They lived happily ever after.

The audience loved the part about the gingerbread man - what a master stroke of a plot twist!

The story tellers were then given a blank story book to record their story and encouraged to become the author and illustrator of their own unique tale.  Each page was colour coded as a reminder for each part of the story.  The children made a start on them straight away in independent learning and they will have access to their story book over the coming weeks to add to it when they wish. 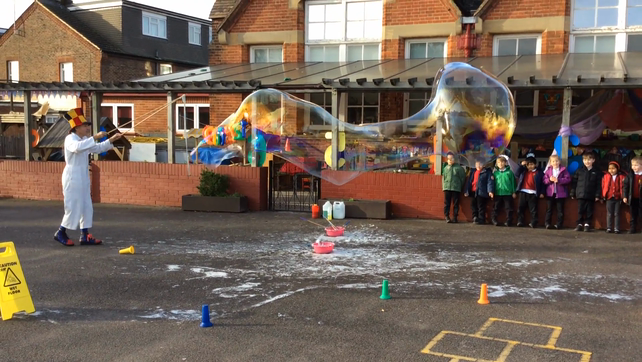 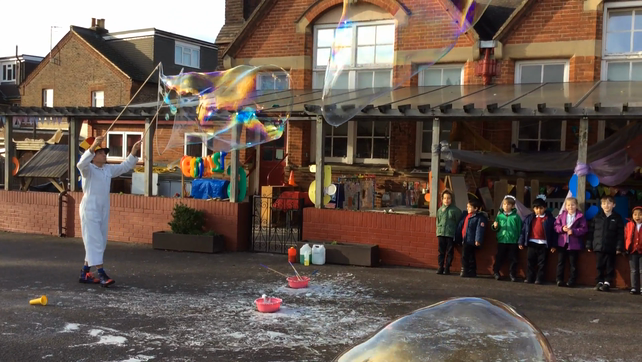 During our circus workshop we made giant bubbles!

Let's imagine we are at the circus! 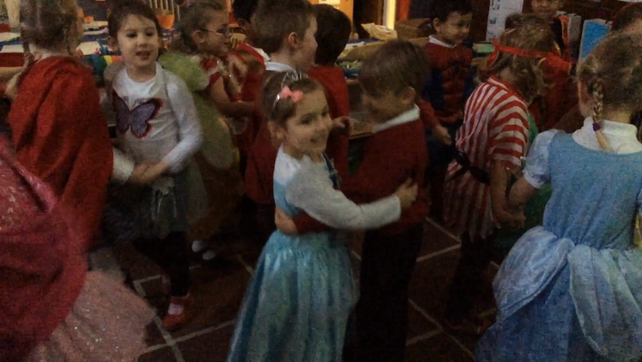 Before our Fairy Tale Snow Ball, we practised our ballroom dancing in pairs.

Posting our letters to Father Christmas 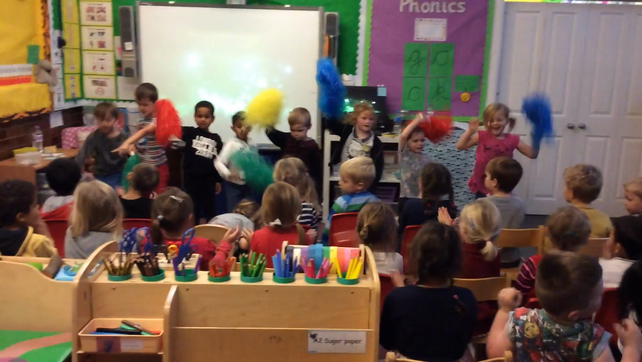 We decided to make our own firework display. We watched a video of a firework display in London and looked at how the fireworks shot into the sky and exploded like golden rain. We practised moving like fireworks to the music using the pom poms and rainbow ribbons. We made posters and tickets for our show and a ticket office using the big blocks. We put the chairs into lines for the audience and showed them to their seats. The audience clapped and cheered to encourage the performers! We had lots of fun! 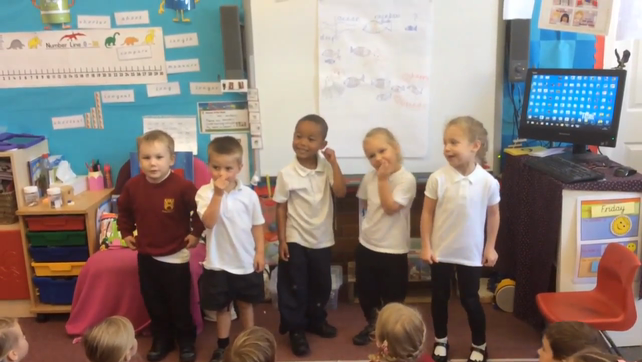 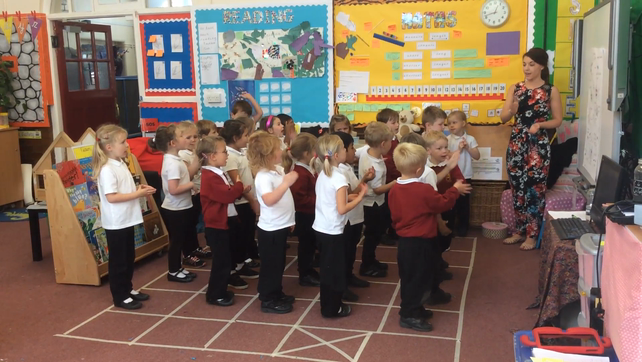 We have really enjoyed reading the story Rainbow Fish. We identified the main events and the key vocabulary in the story and created a story map. A story map is created of words and pictures that help remind us of the main events. We then used this story map to retell the story. We are so proud of the Reception children as this is the first time we have retold a story and it only took us two 10 minute sessions to learn it!

Settling into Reception. Look what we have been up to...